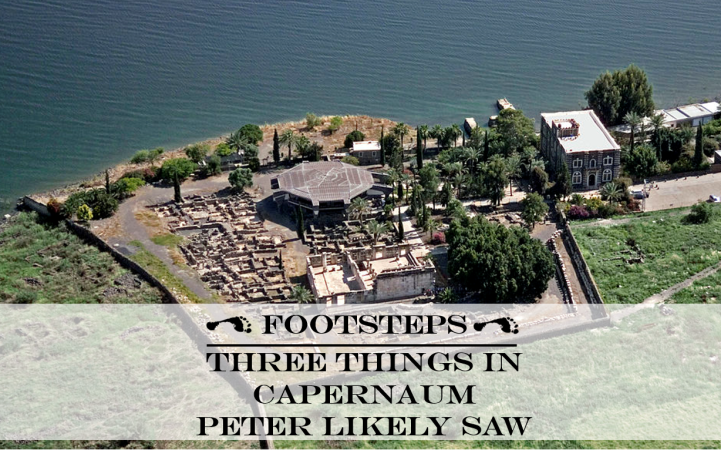 In the first century, Capernaum was a significant town of about 1500 people located near the Via Maris (The Way of the Sea), an important international trade route that linked Damascus with the Mediterranean.1 Being on the trade route meant that the fishing and farming industries thrived in the area. Capernaum was also situated within the tetrarchy of Herod Antipas2, and was populated with administrative officials, such as Matthew the tax-collector (Matt. 9:1,9), as well as soldiers (Matt. 8:5).

Today the ruins of Capernaum at Tell Hum are a popular tourist destination on the shore of the Sea of Galilee.  Tell Hum was first identified as Capernaum in 1866 by British engineer and explorer, Captain Charles Wilson.3  Archaeological exploration at Capernaum began in 1905, with further excavations carried out by the Franciscans (who own the western portion of the site) in the 1920’s and from 1968-1987, and again in the early 2000’s.4  Archaeologists also dug at the northeastern site, owned by the Greek Orthodox Church, from 1978-1987.5  These excavations uncovered the remains of Capernaum as it was in Peter’s day, and in the time periods following.  Here are three things which Peter likely saw in Capernaum.

The Harbor of Capernaum

As a fisherman living in Capernaum, Peter was, no doubt, very familiar with the harbor.  Scripture records that he owned a boat from which he often fished (Luke 5:3-7).  We also see him fishing with a net from shore, near Capernaum (Mark 1:16-21) when Jesus first calls him to be his disciple.  When Jesus came to the disciples walking on the water, they were in a boat heading to Capernaum and, after taking him into the boat, they “reached the shore where they were heading.” (John 6:17-21).

The ancient harbour of Capernaum lay undiscovered until Mendel Nun began surveying the shore of the Sea of Galilee in search of ancient ports.  Nun, a fisherman himself and the foremost expert on ancient harbours on the sea of Galilee, described the port at Capernaum as he found it:

“Along the shore ran a 2,500-foot-long promenade, or paved avenue, supported by an 8-foot-wide seawall…. Vessels at Capernaum could load and unload cargo and passengers on several piers that extended about 100 feet from the promenade into the lake. Some of the piers are paired and curve toward each other, forming protected pools. Others are triangular in shape.”6

It is at this port that Peter likely docked his boat many times. When the water level of the Sea of Galilee is low, the remains of the Capernaum harbour  can be seen along the shore, near the northern portion that is owned by the Greek Orthodox church.

The Synagogue of Capernaum

After calling Peter, Andrew, James and John as his disciples, Jesus led them to Capernaum where he went into the synagogue and began to teach (Mark 1:16-21).  As a resident of Capernaum, Peter had likely been to the synagogue many times before.  As a follower of Jesus, he witnessed numerous miracles and lessons from his Master at the synagogue at Capernaum.  It is where Jesus cast a demon out of a man (Mark 1:23-26) and healed a man with a withered hand (Mark 3:1-6).  It is also where Jesus taught that he was the Bread of Life (John 6:48, 59).

Today the impressive remains of a white limestone synagogue are prominent at Capernaum.  Based on coins found beneath the floors, this synagogue dates to the 4th or 5th centuries AD.7  Excavations by Corbo and Loffreda have revealed that it was built upon the foundation of a prior structure made of black basalt stone, which was slightly out of line with the foundations of the later synagogue.8 Pottery, discovered beneath the floor of the black basalt foundations, dated that structure to the first century.9 Scholars have concluded that the black basalt stones are the remains of the foundation of the first-century synagogue, and that the white limestone synagogue was built over it, in keeping with the Jewish tradition of building on sacred spaces.  This then, is likely the synagogue that Peter frequently attended.

One of the first miracles Jesus performed in Capernaum occurred in the home of Peter and Andrew; it was here that Jesus healed Peter’s mother-in-law (Mark 1:29-31).

In 1968, Stanislao Loffreda began excavating the octagonal Byzantine church just south of the synagogue.  His investigations revealed that the Byzantine church had been built overtop of a home that had been inhabited in the first century.  The discovery of Herodian oil lamps helped date this structure.10 The excavators concluded that about 50 years after the resurrection of Jesus, the main room had been enlarged and plastered and converted to a domus ecclesia (house church).11 Fragments of painted plaster from the structure, bearing graffiti from the third and fourth centuries AD of Christian symbols and invocations to Christ, demonstrate that the site was venerated by early Christian pilgrams.12  The writings of Egeria (ca. 380 AD) and the anonymous pilgrim of Piacenza (ca. 570 AD) testify to the early belief that the church in Capernaum was built on top of the house of the Apostle Peter.13

It seems that the Byzantines built their church atop a site that had been venerated for centuries as the house of Peter, the site of Jesus’ miracle.  While a 100% positive identification is impossible, the archaeological evidence of an early Christian church meeting in a first-century home in Capernaum suggests that it may indeed be the remains of Peter’s house.

As we walk in the footsteps of people named in Scripture, archaeology lets us travel back in time, as it were, to view the sites as people living in biblical times would have seen them.  This helps us to contextualize the written accounts and see them as historical documents.

When Matthew, Mark, Luke, and John each wrote their biographies of Jesus, they were describing real events, set in real places, at a real point in history.  Matthew and John were eyewitnesses to the events, while Mark wrote down Peter’s teaching14 and Luke claims to have carefully investigated the events (Luke 1:3).  The village of Capernaum that each describe lines with what we know from the archaeological ruins of the town. This is what we would expect from eyewitness, and carefully investigated accounts.

13 Eric M. Myers and Mark A. Chancey, Alexander to Constantine: Archaeology of the Land of the Bible, (New Haven and London: Yale University Press, 2012), 191.