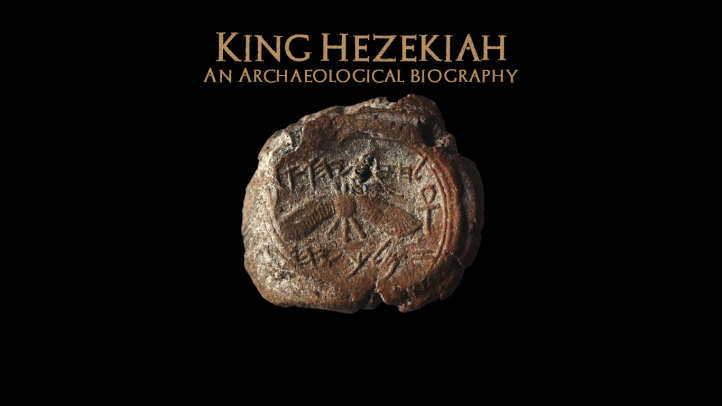 Biography: from the Greek bios (life) and graphia (writing) – a written account of someone’s life as recorded by another person

Archaeology: from the Greek arkhaois (ancient) and logia (to speak about) – the study of the material culture of ancient humans.

What if we combined the two?  What if we used archaeology as a means to write about someone’s life.  An archaeological biography, or a bioarchaeography, if you will.  (Yes, I know that’s not a “real” word; it’s a term I coined.  We’ll see if it catches on.)

In this new series, we’ll be exploring biblical people using archaeological artifacts relating to their lives.  We’ll begin with a bioarchaeography of King Hezekiah.

Hezekiah reigned as King of Judah from 716 to 687 BC, after having ruled for approximately 13 years in a co-regency with his father Ahaz.1  In 2 Chronicles 29:1-2 we read, “Hezekiah began to reign when he was twenty-five years old, and he reigned twenty-nine years in Jerusalem. His mother’s name was Abijah the daughter of Zechariah.  And he did what was right in the eyes of the Lord, according to all that David his father had done.”  He is, perhaps, best known for this religious reforms and for his stand against the Assyrian invasion of Judah by Sennacherib in 701 BC.

Multiple bullae (clay seal impressions) of King Hezekiah have been found.  While most have come via the antiquities market, in 2015 Dr. Eilat Mazar announced that another Hezekiah bulla had been discovered while wet-sifting material  excavated from a refuse dump in a Royal Building at the Ophel.2 The bulla is about one centimeter in diameter bears an ancient Hebrew inscription:

“Belonging to Hezekiah [son of] Ahaz king of Judah”

The seal impression also depicts a two-winged sun and ankh symbols.  Scholars at the Hebrew University of Jerusalem explained the iconography this way:

“The symbols on the seal impression from the Ophel suggest that they were made late in his life, when both the Royal administrative authority and the King’s personal symbols changed from the winged scarab (dung beetle)—the symbol of power and rule that had been familiar throughout the Ancient Near East, to that of the winged sun—a motif that proclaimed God’s protection, which gave the regime its legitimacy and power, also widespread throughout the Ancient Near East and used by the Assyrian Kings.”3

The Hezekiah bulla affirms not only Hezekiah’s historicity, but his lineage as well, affirming these biblical details about his life.

Hezekiah was instrumental in leading the people of Judah away from idolatry and back to the worship of Yahweh.  In 2 Kings 18:4 we read, “He removed the high places and broke the pillars and cut down the Asherah. And he broke in pieces the bronze serpent that Moses had made, for until those days the people of Israel had made offerings to it (it was called Nehushtan).”

Evidence of Hezekiah’s religious reforms have been discovered at Arad, Beer-Sheba, Lachish, Tell Motza, and Tell Lahif.4  For example, the famous four-horned alter at Beer-Sheba was dismantled during Hezekiah’s reign and three of its four horns were found in secondary use in a wall, indicating the structure was no longer considered sacred.  At Lachish, a gate-shrine was unearthed in 2016.  Two small horned alters were discovered, whose horns had been broken off, and a toilet had been placed in the shrine as a symbolic act of desecration (2 Kings 10:27).5

Perhaps the defining moment in King Hezekiah’s life occurred when Sennacherib, King of Assyria came to attack Jerusalem.   Hezekiah received word prior to the impending invasion, giving him enough time to improve the city’s fortifications and build a tunnel to bring water into the city.

“When Hezekiah saw that Sennacherib had come and that he intended to make war on Jerusalem, he consulted with his officials and military staff about blocking off the water from the springs outside the city, and they helped him. A large force of men assembled, and they blocked all the springs and the stream that flowed through the land. “Why should the kings of Assyria come and find plenty of water?” they said….It was Hezekiah who blocked the upper outlet of the Gihon spring and channeled the water down to the west side of the City of David.”

2 Kings 20:20 further summarizes Hezekiah’s life: “As for the other events of Hezekiah’s reign, all his achievements and how he made the pool and the tunnel by which he brought water into the city, are they not written in the book of the annals of the kings of Judah?”

An ancient aqueduct, dating to the time of King Hezekiah, was discovered by Edwin Robinson in 1838.  Several years later an inscription was discovered in the tunnel which recorded how it had been built.  Written in ancient Paleo-Hebrew and dated to the 8th century BC, the inscription reads,

And this was the way in which it was cut through: While [the quarrymen were] still […] axes, each man toward his fellow, and while there were still three cubits to be cut through, [there was heard] the voice of a man calling to his fellow, for there was an overlap in the rock on the right [and on the left]. And when the tunnel was driven through, the quarrymen hewed [the rock], each man towards his fellow, axe against axe; and the water flowed from the spring toward the reservoir for 1,200 cubits, and the height of the rock above the heads of the quarrymen was a hundred cubits.6

Within the Jewish Quarter of Jerusalem, archaeologists unearthed further evidence of Hezekiah’s preparation for war.  The Broad Wall, as it is known today, is a 7m thick defensive fortification that still stands 3.3 m tall in some places.  It was built by Hezekiah to enclose the Western Hill and it increased the defensive walls of the city five-fold.7

Sennacherib’s invasion of Judah is recorded in 2 Kings 18:13 “In the fourteenth year of King Hezekiah, Sennacherib king of Assyria came up against all the fortified cities of Judah and took them.” This was in response to Hezekiah’s rebellion against the Assyrian king, refusing to serve him as a vassal (2 Kings 18:7).

The Bible isn’t the only ancient text that describes this attack, however; multiple copies of the Annals of Sennacerib have been unearthed.  The Taylor Prism, the Oriental Institute Prism and the Jerusalem prism are three clay prisms that contain the same text describing events from the reign of Sennacherib.  The Taylor Prism was discovered in 1830 by Colonol Robert Taylor while excavating the ancient Assyrian capital of Nineveh.  On it, Sennacherib boasts:

“As for Hezekiah the Judahite who had not submitted to my yoke, I surrounded 46 of his strong walled towns, and innumerable small places around them, and conquered them by means of earth ramps and siege engines, attack by infantrymen, mining, breaching, and scaling. 200,150 people of all ranks, men and women, horses, mules, donkeys, camels, cattle and sheep without number I brought out and counted as spoil. He himself I shut up in Jerusalem, his royal city, like a bird in a cage. I put watch-posts around him, and made it impossible for anyone to go out of his city.”8

Sennacherib also states, “Now the fear of my lordly splendor overwhelmed that Hezekiah”9 and he confirms that the Judahite King did indeed pay him tribute (2 Kings 18:14).

It is interesting to note that Sennacherib does not boast of destroying Jerusalem, but merely shutting Hezekiah up in his royal city “like a bird in a cage.”  This would be consistent with the biblical description of God’s rescue of his people and Sennacherib’s return to Assyria without conquering Jerusalem (2 Kings 19:35-36).

The account in the Bible of Hezekiah’s life, his religious reforms and his stand against Sennacherib, King of Assyria, align with what is known about him from the archaeological record.   He was one of the greatest kings Judah had ever had.  In Scripture, his life is summarized this way: “He trusted in the Lord, the God of Israel, so that there was none like him among all the kings of Judah after him, nor among those who were before him.” (2 Kings 18:5).