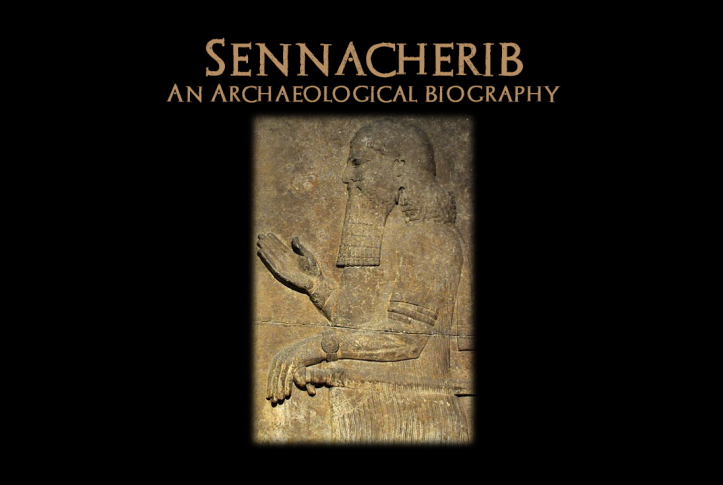 In our next bioarchaeography, we’ll be exploring the life of Sennacherib, King of Assyria, using archaeological remains.

Sennacherib is mentioned by name 16 times in Scripture, more than any other Assyrian ruler.  From a biblical perspective, he is most famous for his invasion of Judah in 701 BC and his siege against King Hezekiah and Jerusalem (2 Ki 18-19; 2 Ch 32; Is 37).

When his father, Sargon II, was killed in battle in 705 BC, Sennacherib inherited the Assyrian throne.  Almost immediately, he marched to Babylon to put down a rebellion led by Merodach-Baladan.  Though Merodach-Baladan escaped, Sennacherib retook Babylon.  In his annals, as recorded on the Oriental Institute Prism, Chicago, Sennacherib records, “In my first campaign, I accomplished the defeat of Merodach-Baladan, king of Babylonia, together with the army of Elam, his ally in the plain of Kish. In the midste of the battle he forsook his camp, and made his escape alone; (so) he saved his life. The chariots, horses, wagons, mules which he left behind at the onset of the battle my hands seized. Into his palace, which is in Babylon, joyfully I entered” (Col. I, Lines 20-28).1 Merodach-Baladan would continue to be thorn in Sennacherib’s side throughout his reign and may have even tried to entice Hezekiah to join his rebellion at one point (Is. 39:1).

Sennacherib, like most ancient kings, boasted of his greatness.  On the Bellino Cylinder, he describes himself in these words:

“Sennacherib, great king, strong king, king of Assyria, unrivalled king, pious shepherd who reveres the great gods, guardian of truth who loves justice, renders assistance, goes to the aid of the weak, (and) strives after good deeds, perfect man, virile warrior, foremost of all rulers, the bridal that controls the insubmissive, (and) the one who strikes enemies with lightning.”2

Sargon II had spent a decade building Khorsabad (ancient Dur Sharrukin) as his royal city.  Upon his death, Sennacherib abandoned Khorsabad and moved the capital 20 km south to Ninevah.  There he devoted himself to rebuilding the city and to building his palace.  In one inscription Sennacherib declares, “Thereon (lit. therein) I had them build a palace of ivory, ebony(?), boxwood (?), mususkannu-wood, cedar, cyprus and spruce, the “Palace without a Rival.” for my royal abode.”3

In 1847, Austen Henry Layard excavated at Nineveh and unearthed the “Palace without Rival” – the Southwest Palace of Sennacherib, located on the citadel mound of Kuyunjik.  The palace itself was 180 by 190 meters, contained at least 80 rooms, and was lined with many sculptures and almost 3 km of reliefs.4  The remains of Sennacherib’s palace are still visible in Google satellite images, although, sadly, the site was looted and destroyed by ISIS in 2016.

It is interesting to note that some of the reliefs discovered in the palace at Nineveh depict its construction.  The workers are seen in different rows, each in distinct dress, representing different ethnic groups.  The slaves in one row are strikingly similar to the captives portrayed on the famous Lachish Reliefs (see below).  Some scholars believe these are men from Judah who were taken to Nineveh and forced to help with the construction of Sennacherib’s palace.5

The Annals of Sennacherib

Sennacherib recorded his triumphs in his annals, which survive on three nearly identical clay prisms: the Taylor Prism6, the Oriental Institute Prism7, and the Jerusalem Prism8.  These are significant artifacts as they record Sennacherib’s campaign into Judah in 701 BC.  King Hezekiah rebelled against Assyrian control (2 Kings 18:7), which led Sennacherib to invade Judah in order to restore his hold on the territory to the west.  In 2 Kings 18:13 we read, “In the fourteenth year of King Hezekiah, Sennacherib king of Assyria came up against all the fortified cities of Judah and took them.”  Scripture further records Sennacherib’s siege at Lachish (2 Kings 18:17 – see below), the tribute that Hezekiah paid to him (2 Kings 18:14), and the fact that the Assyrians were not able to take Jerusalem (2 Kings 19:34-36).

From a historical perspective it is interesting to compare the biblical account with the Assyrian record of this event.  The text of Sennacherib’s annals records:

“As for Hezekiah, the Jew, who did not submit to my yoke, 46 of his strong cities, as well as the small cities in their neighborhood, which were without number – by levelling with battering-rams (?) and by bringing up siege-engines (?), I besieged and took (those cities).  200,150 people, great and small, male and female, horses, mules, asses, camels, cattle and sheep, without number I brought away from them and counted as spoil.  Himself, like a caged bird I shut up in Jerusalem his royal city….In addition to the 30 talents of gold and 800 talents of silver (there were), gems, cosmetics (?), jewels (?), large sandu-stones, couches of ivory, house chairs of ivory, elephant hide, ivory (lit. elephant’s teeth), ushu-wood, ukarinnu-wood, all kinds of valuable (heavy) treasures, as well as his daughters, his harem, his male and female musicians, (which) he had (them) bring after me to Nineveh, my royal city.  To pay tribute and to accept (lit. do) servitude, he dispatched his messenger(s).”9

Sennacherib’s claim to take 46 of Hezekiah’s strong cities aligns with the biblical record of the Assyrian capture of the fortified cities of Judah.   The fact that tribute was paid is also affirmed, with the amount of gold being the same in both the Assyrian and Judahite sources.  (The difference in the amount of silver paid may be attributed to a different method of measuring, Assyrian exaggeration or scribal error).  Finally, the fact that Sennacherib records that he shut Hezekiah up in his royal city like a caged bird, but does not record the capture of Jerusalem is telling.  It’s essentially a tacit admission of his failure to capture Jerusalem, which is in accord with the biblical account.10

When Sennacherib returned to Nineveh from his campaign into Canaan, he commissioned a series of reliefs to display his greatest triumph in Judah; these he hung  on the walls in his southwest palace.  Since he could not boast of conquering the royal city of Jerusalem, he displayed scenes from his successful siege at Lachish.11

Amahai Mazar notes, “The relief was most probably made in Assyria from sketches prepared during the actual war by an artist viewing the onslaught from Sennacherib’s camp’ the camp was perhaps located (according to D. Ussishkin) southwest of the city.”12 The images portray in stunning detail both the battle and the surrender of the city.  In one scene, Sennacherib sits on his throne overseeing the booty that is paraded before him.  A cuneiform inscription in Akkadian reads, “Sennacherib, king of the world, king of Assyria, set up a throne and the booty of Lachish passed before him.”13

Excavations at Lachish have unearthed evidence of Sennacherib’s campaign.  Part of the Assyrian siege ramp can still be seen at Tel Lachish today.  While the lower part is missing, the angle of the remaining upper part makes it possible to reconstruct the possible dimensions. It appears the width of the bottom of the ramp would have been 50-75 m fanning down to a width of 25 m at the top. It is estimated that 13,000-19,000 tons of material would have been required to construct the siege ramp.14  In addition, hundreds of iron arrowheads, sling stones, and heavy weight stones that were thrown down from the city walls at the enemy were discovered in excavations.15

The Death of Sennacherib

Scripture records that Sennacherib was ultimately murdered by his sons: “And as he was worshiping in the house of Nisroch his god, Adrammelech and Sharezer, his sons, struck him down with the sword and escaped into the land of Ararat. And Esarhaddon his son reigned in his place” (2 Kings 19:37).

An Assyrian inscription of Esserhaddon alludes to his father’s violent death at the hands of his  brothers: “I am my older brothers’ youngest brother (and) by the command of the gods Aššur, Sîn, Šamaš, Bēl, and Nabû, Ištar of Nineveh, (and) Ištar of Arbela, (my) father, who engendered me, elevated me firmly in the assembly of my brothers, saying: ‘This is the son who will succeed me.’16

The inscription goes on to say: Thereafter my brothers went mad and whatever was wicked against gods and men they did, and plotted evil:  they drew the sword in the midst of Nineveh godlessly : to exercise the kingship against each other they rushed like young steers.”17  Essarhadon proceeds to relate how, when he heard the news of his fathers murder, cried, “Woe” and rent his princely robe.  He then chased the “usurpers” and records how, “those rebels, the ones engaged in revolt and rebellion, when they heard of the advance of my campaign, they deserted the army they relied on and fled to an unknown land.”18

Sennecharib’s reign and his campaign into Canaan are well known from Assyrian sources.  At many points, these align with details in the biblical text and are affirmed by archaeological remains at various sites.

5 David Ussishkin, “Sennacherib’s Campaign to Judah: The Archaeological Perspective with an Emphasis on Lachish and Jerusalem” in Sennacherib at the Gates of Jerusalem, eds. Isaac Kalimi and Seth Richardson (Boston: Brill, 2014), 101.  Online: https://www.academia.edu/5823788/Sennacheribs_Campaign_to_Judah_The_Archaeological_Perspective_with_an_Emphasis_on_Lachish_and_Jerusalem (Accessed June 29, 2020).

6 The Taylor Prism is on display in The British Museum: https://www.britishmuseum.org/collection/object/W_1855-1003-1

8 The Jerusalem Prism is located in the Israel Museum, Jerusalem: https://www.imj.org.il/en/collections/372815

16 “Ninevah A,” The Royal Inscriptions of the Neo-Assyrian Period. Online: http://oracc.museum.upenn.edu/rinap/corpus/ (Accessed June 30, 2020).

18 “Ninevah A,” The Royal Inscriptions of the Neo-Assyrian Period. Online: http://oracc.museum.upenn.edu/rinap/corpus/ (Accessed June 30, 2020).

Here were the top three reports in biblical archaeology for September 2022, including at least one that will be on everyone year-end top ten list.
Pekah ruled over the northern Kingdom of Israel during a turbulent point in history. Assyrian records help make sense of the apparent contradictory biblical data regarding his reign.
News (or studies) of significant finds dominated the media this past month, including important discoveries in Jerusalem, Shiloh, and El-Araj (biblical Bethsaida?). Here were the TOP THREE REPORTS IN BIBLICAL ARCHAEOLOGY in August 2022.
I've been privileged to be a guest on 34 episodes of the TV show Digging for Truth by the Associates for Biblical Research (@digthebible) . Combined, these have amassed over 1,000,000 views on YouTube. My humble thanks to all who have tuned in. If you'd like to see these episodes, you can find them here: