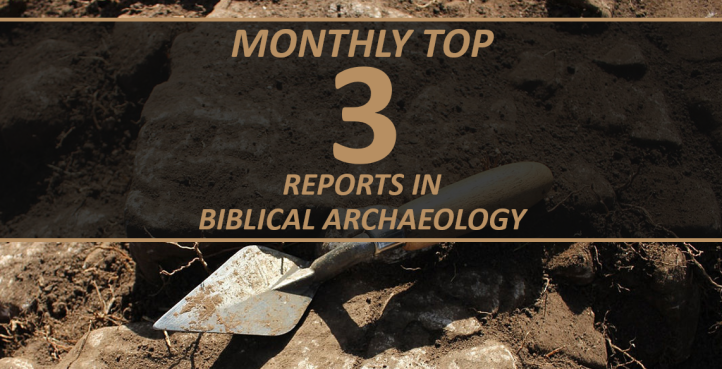 This month the top three reports in biblical archaeology highlight the use of technology in analyzing previous discoveries to further our understanding of the ancient world.

A new study of the residue on two altars in the cultic shrine at Tel Arad has revealed the use of cannabis and frankincense in worship at the site.  Tel Arad was a fortress that guarded the southern border of the kingdom of Judah from the ninth century to the sixth century BC.  Within the fortress archaeologists discovered a small temple with two limestone altars at the entrance.  When researchers tested the resin on the alters in the 1960’s the tests were inconclusive.  The residue was recently reanalyzed independently at two different labs with similar results.  One altar had the remains of frankincense and animal fat; the other altar had residue from burnt cannabis and dung.  The study’s authors note this is the first time a hallucinogenic substance has been found in the Kingdom of Judah, and the earliest evidence of the use of frankincense in Judahite worship.

An interdisciplinary team from the Weizmann Institute and the Israel Antiquities Authority has used “microarchaeology,” collecting and carbon-dating minuscule samples taken from ancient mortar to identify when Wilson’s Arch at the Temple Mount was constructed.  Their study was recently published in the journal PLOS ONE in an article entitled, “Radiocarbon dating and microarchaeology untangle the history of Jerusalem’s Temple Mount: A view from Wilson’s Arch.”  Throughout the years, various dates had been proposed for the construction of Wilson’s Arch, named after the 19th century geographer Charles Wilson who surveyed Jerusalem.  Some thought it was constructed in the early Roman era (before AD 70), others believed it was built in the mid-Roman period (1st or 2nd century) and still others held to the theory that it was constructed in the early Islamic period, 600 years later.  Researchers were able to settle this dispute by carbon-date charred seeds in the mortar between the stones that was once a part of the original structure, not added later.  The results showed that Wilson’s Arch was constructed during the early Roman period under King Herod, and was originally 7.5 meters wide.  The bridge was expanded several decades later becoming 15 meters wide.  The new methodology and technology associated with “microarchaeology” has the potential of dating monumental structures throughout the ancient world.

A new study published in the latest issue of the journal Cell, uses DNA extracted from the Dead Sea Scrolls to identify the type of animal skin used in the parchment.  As part of the seven-year study, scholars first generated the genomic sequence from 35 ancient breeds of animal, as well as four modern types.  They then used non-invasive ways of collecting DNA from the scrapings of the unwritten backside of the fragments, or in some cases, even from the dust on the tape attached to the scrolls.  The study has revealed that most of the Dead Sea Scroll fragments were written on sheep skins, and not goat skins, as previously thought.  Two scroll fragments of Jeremiah were found to be written on calfskin, which the authors of the study believe indicates they came from outside the Judean Desert region of Qumran.  Scholars hope to be able to continue to identify the different herds of animals used in making the parchments of the Dead Sea Scrolls, as well as use the technology to match fragments from the same scroll, potentially leading to the reconstruction of more texts.

Get the latest BREAKING NEWS in biblical archaeology each week here: https://biblearchaeology.org/current-events-list

What would we know about Jesus of Nazareth if we didn't have the New Testament documents and only used non-biblical literary, historical sources? The answer may surprise you. Here are the TOP TEN HISTORICAL REFERENCES TO JESUS OUTSIDE OF THE BIBLE.
Here were the TOP THREE REPORTS IN BIBLICAL ARCHAEOLOGY in October 2022: a geomagnetic study that affirms biblical battles, a stunning mosaic, and possible evidence of a first-century synagogue at Chorazin.
1,000,000+ views in four years!!!
NEW BLOG: Hazael, one of the most powerful kings of Aram-Damascus, figures prominently in the book of 2 Kings. Here is the archaeological evidence that both affirms his historicity and illuminates the world in which he ruled.