I’m always interested to hear how people describe the Bible.

In a Huffington Post article from a few years ago Jeffery Small declared, “I fear that an insistence on a literal or historical reading of the Bible will ultimately lead to the irrelevance of Christianity in our society. By throwing off the shackles of having to believe in the historicity of the Bible, we are free to interpret the stories as a testament to the religious experiences of people from a different age”

While the author and I would disagree about whether a historical reading will lead to the irrelevance of Christianity in our society (I would argue the exact opposite is true), I do agree that discarding the historicity of Scripture allows one to freely interpret the stories however one likes.  I’m not sure that’s a good thing.  Moreover, it ignores a crucial fact that cannot be escaped:  the Bible claims to be a document rooted in actual history.

1 Kings 6:1 – In the four hundred and eightieth year after the Israelites had come out of Egypt, in the fourth year of Solomon’s reign over Israel, in the month of Ziv, the second month, he began to build the temple of the LORD.

Luke 3:1-2 – In the fifteenth year of the reign of Tiberius Caesar—when Pontius Pilate was governor of Judea, Herod tetrarch of Galilee, his brother Philip tetrarch of Iturea and Traconitis, and Lysanias tetrarch of Abilene— during the high priesthood of Annas and Caiaphas, the word of God came to John son of Zechariah in the desert.

These texts (and many others like it) do not sound like mere mythology or allegory.   Rather the authors are basing their stories in a historically verifiable time and place.

I follow closely the happenings in the world of biblical archaeology.   Increasingly, I’m convinced of the Bible’s accuracy in describing past events, places and people. Here then are three discoveries in Biblical archaeology you probably never heard about 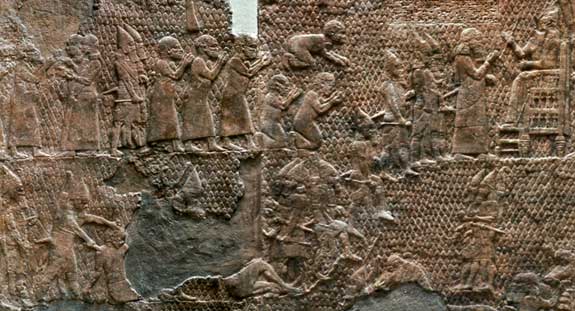 In 701 BC, Sennacherib, King of Assyria, attacked Judah. The Bible describes the siege of the city of Lachish as follows: “Later, when Sennacherib king of Assyria and all his forces were laying siege to Lachish, he sent his officers to Jerusalem with this message for Hezekiah king of Judah and for all the people of Judah who were there” (2Chr. 32:9).

In the mid-1800’s the Assyrian capital of Ninevah was excavated and the Lachish reliefs were discovered on the walls of Sennacherib’s palace. They depict the siege at Lachish. The inscription reads, “Sennacherib, the mighty king, king of the country of Assyria, sitting on the throne of judgment, before (or at the entrance of) the city of Lachish (Lakhisha). I give permission for its slaughter”

These historical events are also recorded in the Assyrian cuneiform prisms and confirmed by the archaeological excavations at Lachish. In fact, there is an amazing number of diverse sources for an 8th century BC event, all testifying to the validity of what is described in the Bible.

PLACES – The Pool of Bathesda – John 5

The Pool of Bethesda was the location where Jesus healed the lame man who had been an invalid for 38-years. It is described in John 5 this way: “Now there is in Jerusalem near the Sheep Gate a pool, which in Aramaic is called Bethesda and which is surrounded by five covered colonnades.” (John 5:2)

The actual Pool of Bathesda was first excavated in the 19th century, but I was only recently that the site has been accurately identified and interpreted.   The Biblical Archaeology Review recently described the findings.

“The Bethesda Pool is described as having five porticoes—a puzzling feature suggesting an unusual five-sided pool, which most scholars dismissed as an unhistorical literary creation. Yet when this site was excavated, it revealed a rectangular pool with two basins separated by a wall—thus a five-sided pool—and each side had a portico.” It’s amazing to think that even small, seemingly insignificant details in the Bible are being confirmed through archaeology.

If there is one figure in Scripture whose existence has been doubted, it’s Balaam, he of the talking donkey.   The Bible describes Balaam, son of Beor, as a pagan seer, who the king of Moab hires to curse Israel.   Num. 24:15 says, “Then he uttered his oracle: “The oracle of Balaam son of Beor, the oracle of one whose eye sees clearly…”

In 1967, a plaster Aramaic text was discovered in an ancient building in in Deir ‘Alla, Jordan.   Dated to ca. 800 BC, the inscription is 50 lines of text in faded red and black ink. It reads”“Warnings [Sayings] from the Book of Balaam,the son of Beor. He was a seer of the gods.”   It was found a mere30 miles from the area where Balaam is said to have engaged Israel prior to their crossing of the Jordan River, in the plains of Moab.   This extra-biblical confirmation of Balaam’s existence lines up with how Scritpure describes him.

There are thousands of Biblical sites which have been excavated in the Middle East. Over 50 people described in Scripture have already been confirmed through archaeological research. Historical sources have attested to scores of historical events recorded in the Bible.

Dr. Nelson Glueck, Rabbi, Archaeologist and former president of Hebrew Union College has said, “It may be stated categorically that no archaeological discovery has ever controverted a Biblical reference. Scores of archaeological findings have been made which confirm in clear outline or exact detail historical statements in the Bible. And, by the same token, proper evaluation of Biblical description has often led to amazing discoveries.”

Rather than “throwing off the shackles of having to believe in the historicity of the Bible” Christians can stand assured knowing that the Bible is a historically reliable document.