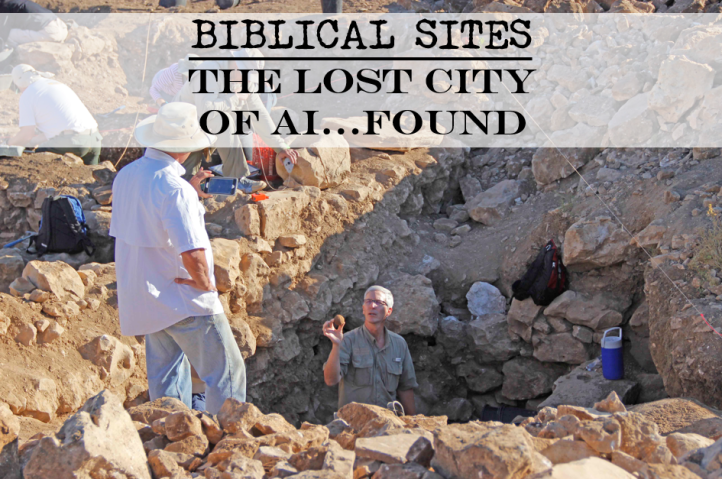 Joshua 7 and 8 recount the First and Second Battles of Ai.  Et Tell has been accepted as the default site of Ai since W.F. Albright’s article on the subject in 1924.1  Et-Tell, however, fails to meet the biblical criteria for the city. Joseph Callaway, who excavated at et-Tell from 1964 –70 concluded: “Ai is simply an embarrassment to every view of the conquest that takes the biblical and archaeological evidence seriously.”2 But what if they were looking at the wrong site?  What if et-Tell is not the city of Ai that Joshua and the Israelites conquered?

When Edwin Robinson explored the area in 1838, the local people pointed to a different site – Khirbet el-Maqatir – as Ai.3 Between 1995 and 2017 the Associates for Biblical Research (BibleArchaeology.org) excavated at Khirbet el-Maqatir and meticulously uncovered a fortified settlement from the time of Joshua that had been destroyed by fire.  Archaeologist Gary Byers, who served as the administrative director of ABR’s excavations at Khirbet el-Maqatir says there are three ways we can know that this is the site of Joshua’s Ai: it has the right stuff in the right place at the right time.4

In order to identify the site of the ancient city of Ai from Joshua’s day a number of biblical criteria need to be met relating to geography and topography:

The late Dr. David Livingston identified Bethel as modern el-Bireh.  Building on his work, archaeologist Dr. Bryant Wood convincingly argued Bethel is indeed modern el-Bireh and Beth-Aven is modern Beitin and that only Khirbet el-Maqatir satisfies all of the above criteria.5 Geographically, it lies due east of Bethel/el-Bireh and only 1 mile southeast of Beth Aven/Beitin.

Today, one can see how the battle unfolded by looking at the topography around Khirbet el-Maqatir.  North of the site is the highest hill in the region, called Jebel Abu Ammar, where Joshua’s main force encamped. Between it and Khirbet el-Maqatir is a shallow valley where the King of Ai could see the Israelite decoy force coming to battle.  Immediately west of the site is the steep valley of the Wadi Sheban in which Joshua’s ambush force hid.

In addition to being the in the right place, the site of Ai must also have the right stuff.  Specifically, it must:

Excavations at Khirbet el-Maqatir have revealed a small border fortress dating to the Middle and Late Bronze Ages.  Although only about 2.5 acres in size the foundation of the fortification walls on the north and west side were found to be 13 feet wide.  On the north side of the fortress, a four-chambered gate was unearthed.  Two of the gate’s socket stones were discovered in the gate passageway and others were found nearby.6

The Bible describes the presence of women at Ai in Joshua 8:25, which would initially seem a strange thing at a border military fortress.  However, archaeological evidence of this came in 2009 when an infant burial jar was discovered at Khirbet el-Maqatir with the child’s remains scattered around the jar.  The typology of the offering vessels and the burial jar itself suggest that the infant was buried sometime around 1500 B.C.

Interestingly, there are the remains of a Byzantine monastery at Khirbet el-Maqatir.  The Byzantines often built their churches upon biblical sites and may have built the one here to commemorate the Israelite victory over Ai.

The biblical date for the conquest and the Battles of Ai would be 1406 B.C. (near the end of the Late Bronze Age I period).  This is deduced from a straightforward reading of a number of passages dating the Exodus to 1446 B.C.: 1 Kings 6:1, Judges 11:26-27, Acts 13:19-20 and the number of generations listed 1 Chron. 6:33-38.7 Therefore, any candidate site for the biblical city of Ai that Joshua’s army defeated must meet the following criteria:

Excavations at Khirbet el-Maqatir revealed ample pottery dating to the Late Bronze Age I, much of which had been refired in a site-wide conflagration. This is consistent with a site that had been destroyed by fire as described in Joshua 18:28: “So Joshua burned Ai and made it forever a heap of ruins, as it is to this day.”8

Three Egyptian scarabs were found at the site, including two from the period of the fortress: one dating to the the Middle Bronze III period (ca. 1650–1485 B.C.) and another rarer scarab dating to the 18th Dynasty, likely in the reign of Amenhotep II (ca. 1455-1418 B.C.).  This second scarab was discovered in situ in a sealed locus, providing a terminal date for the fortress toward the end of the 15th century B.C.  Archaeologist, Dr. Scott Stripling concludes: “The two scarabs synchronize with the ceramic analysis and provide firm dates for the operation of the fortress. It now seems clear that the small fortress, likely the Ai of Joshua 7-8, was constructed during the MB III boom and was violently destroyed near the end of LB I.”9

In the absence of any ancient inscription identifying a site, scholars are left to match the archaeological remains with what is known about a place from history.  In the case of Ai, the only ancient text with information about the site is the Bible and Khirbet el-Maqatir is the only site that meets all of the biblical criteria.  It has the right stuff in the right place at the right time.  Rather than being an “embarrassment,” correctly identifying Khirbet el-Maqatir as the site of the city of Ai that Joshua defeated demonstrates the historical reliability of the biblical account of the conquest in the 15th century B.C.