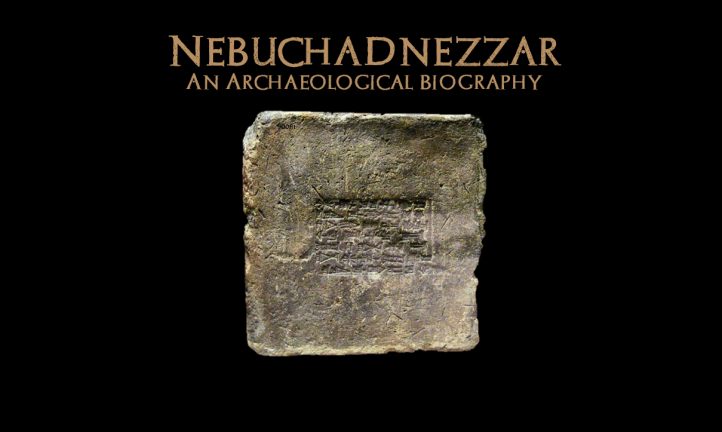 In this series of bioarchaeographies, (from the Greek words bios/life, arkhaois/ancient and graphia/writing), we use archaeology to explore the life of historical figures mentioned in the Bible.  Our next archaeological biography is about one of the most powerful kings in antiquity: King Nebuchadnezzar II.

Nebuchadnezzar ruled over Babylon from 605-562 BC, expanding the empire and transforming the city of Babylon into the envy of the ancient world.  The story of Nebuchadnezzar’s ascension to the throne is told on one of the clay tablets in the Babylonian Chronicles.  The Babylonian Chronicles record Babylonian history year-by-year (although not every year is covered).  Unlike the boasting propaganda of a king’s official inscriptions (see below), these generally record events in the barest of terms.  The scribes who recorded these events seem to represent an independent source, and appear to have used other sources.1 One of the tablets in particular, Babylonian Chronicle 5 (also known as the Jerusalem Chronicle), records events in the early years of Nebuchadnezzar.  It tells how Nebuchadnezzar, the crown prince, mustered the Babylonian army and marched to Carchemish in 605 BC, where he defeated the Egyptian Army.  While there, he received word that his father, Nabopolassar, had died.  The tablet reads:

“For twenty-one years Nabopolassar had been king of Babylon, when on 8 Abu [15 August 605.] he went to his destiny; in the month of Ululu [September.] Nebuchadnezzar returned to Babylon and on 1 Ululu [7 September 605.] he sat on the royal throne in Babylon.” (Obv. 9-11)2

While his father, Nabopolassar, was the first king of the Neo-Babylonian empire, Nebuchadnezzar’s reign was longer and he was arguably the greater king.

Nebuchadnezzar is mentioned close to 90 times in Scripture and figures prominently in the books of 2 Kings, 2 Chronicles, Jeremiah and Daniel.  In Jeremiah 4:7 he is called the “destroyer of nations,” an apt description, as history records that he extended his empire through conquest such that it stretched from the Persian Gulf to the Mediterranean Sea3.  At its height, it included parts of modern-day Kuwait, Iraq, Syria, Jordan, Israel, Lebanon and Turkey.  The Babylonian Chronicle 5/Jerusalem Chronicle records his yearly campaigns into “Hatti-Land” (the Babylonian name for Syria-Palestine), where it says Nebuchadnezzar “marched about unopposed” and “all the kings of the Hatti-land came before him and he received their heavy tribute” (Obv. 16-17).4

“In the seventh year [598/597], the month of Kislîmu, the king of Akkad mustered his troops, marched to the Hatti-land, and besieged the city of Judah and on the second day of the month of Addarunote[February/March 597.] he seized the city and captured the king. [Jehoiachin; cf. Jeremiah 52.28-30; 2 Kings 24.8-17.]  He appointed there a king of his own choice, [“Jehoiachin’s uncle Mattaniah became ling of Judah and changed his name to Zedekiah”: 2 Kings 24.17.] received its heavy tribute and sent to Babylon.” (Rev. 11-13)5

The Jerusalem Chronicle confirms numerous details from the Biblical account, as recorded in 2 Kings 24: the siege of Jerusalem, the deposition of King Jehoiachin, the appointment of King Zedekiah, and the heavy tribute (ie. the treasures from the Temple and palace) that Nebuchadnezzar took.

In Daniel 4:30, King Nebuchadnezzar is walking on the roof of the royal palace of Babylon when he says, “Is not this great Babylon, which I have built by my mighty power as a royal residence and for the glory of my majesty?”  This biblical description is consistent with Nebuchadnezzar’s boasts about his building exploits as recorded in other inscriptions.

Numerous clay foundation cylinders describing Nebuchadnezzar’s greatness as a builder have been discovered.  Ancient Mesopotamian kings would commission clay cylinders to be inscribed in cuneiform script describing and dedicating their construction and then bury them in the foundations of structures they were building or repairing.    On one clay foundation cylinder, Nebuchadnezzar describes the construction of the outer city wall of Babylon, stating, “I built a strong wall that cannot be shaken with bitumen and baked bricks… I laid its foundation on the breast of the netherworld, and I built its top as high as a mountain.”6   In 2014, another Nebuchadnezzar cylinder sold for $605,000 at Doyle New York.  In its inscription, Nebuchadnezzar describes how he rebuilt a temple named E-barra: “I erected E-barra as it was of yore and completed it. I caused it to shine like the bright day.”7

‘I am Nebuchadnezzar, king of Babylon, the exalted prince, the favourite of the god Marduk, the beloved of the god Nabu, the arbiter, the possessor of wisdom, who reverences their lordship, the untiring governor who is constantly anxious for the maintenance of the shrines of Babylonia and Borsippa…By thy command, merciful Marduk, may the temple I have built endure for all time and may I be satisfied with its splendor”8

Perhaps the most famous structure built by Nebuchadnezzar is the famous Ishtar Gate, one of the main gates into the city.  The striking blue bricks, the images of dragons and aurochs (bulls), and the sheer size of the gate have awed the modern-world ever since it was discovered.  The dedication inscription reads:

“Therefore, I [Nebuchadnezzar] pulled down these gates and laid bare their foundations at the water-table with asphalt and bricks and had them made of bricks with blue stone on which wonderful bulls and dragons were depicted.  I covered their roofs by laying majestic cedars length-wise over them.  I hung doors of cedar adorned with bronze ta all the gate openings.  I placed wild bulls and ferocious dragons in the gateways and thus adorned them with luxurious splendor so hat people might gaze on them in wonder.”9

The many building materials and dedications from Babylon identify Nebuchadnezzar as the chief architect who built the city with his mighty power, just as he boasted in the book of Daniel.

Unfortunately, most of what we know about Nebuchadnezzar comes only from the early part of his reign.  According to Hoerth and McRay, “Little is known about the last years of Nebuchadnezzar, but his affliction with boanthropy (a form of illness in which a man believes himself to be an ox; Daniel chapter 4) can be placed within that obscure period.”  Still, many archaeological finds from the ancient Babylonian empire affirm the biblical description of Nebuchadnezzar as king, conqueror and builder.

Who was Cyrus the Great and what is his connection with biblical history? Check out the latest episode of Digging for Truth in which Henry Smith from the Associates for Biblical Research and I answer this question.
Hoshea was the last ruler of the northern kingdom of Israel. Here is some of the archaeological evidence related to his reign.
The news this month from the world of biblical archaeology included discoveries related to the building of a city, the destruction of a city, and everyday life in a city. Here were the TOP THREE REPORTS IN SEPTEMBER 2021.
Is there archaeological evidence that could lead one to reasonably conclude the biblical description of Moses and the Exodus is rooted in historical reality? Yes!