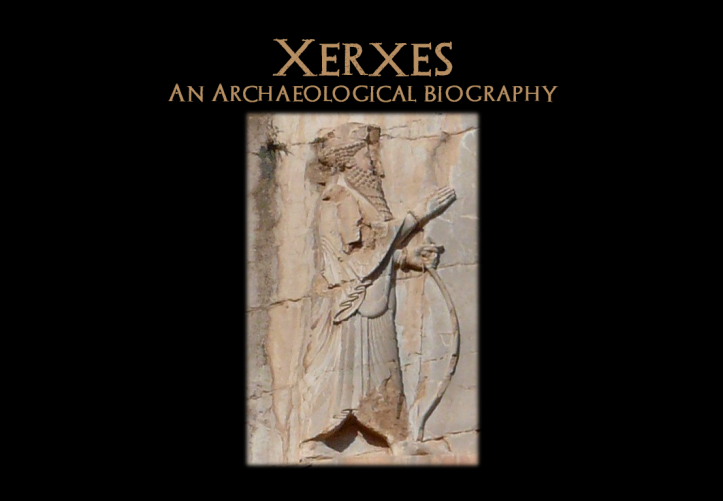 The book of Esther begins with the words, “Now in the days of Ahasuerus, the Ahasuerus who reigned from India to Ethiopia over 127 provinces, in those days when King Ahasuerus sat on his royal throne in Susa, the citadel, in the third year of his reign he gave a feast for all his officials and servants” (Est. 1:1-3).

Who was Ahasuerus?  It was none other than the Persian king, Xerxes the Great.  The name Xerxes comes from the Greek. In Old Persian the king’s name was Khsayarsan, in Akkadian it was Ahsiarsu, and in Hebrew Ahasuerus.1  A misinterpretation of the Hebrew led to the misidentification of Ahasuerus as Artaxerxes in the Septuagint, Josephus, and the Jewish Midrash.2  The sequence of Persian kings in Ezra 4:5-7, however, makes it clear that Ahasuerus was the son of Darius and the predecessor to Artaxerxes: thus, the Xerxes of history and the and Ahasuerus of the book of Esther are one and the same.

Xerxes ascended the throne when is father, Darius, died in November 486 BC.  This is described in the “Harem Inscription,” discovered in the palace of the Persian capital of Persepolis: “Darius had other sons, but – thus was Ahuramazda’s desire – my father Darius made me the greatest after himself. When my father Darius went away from the throne, by the grace of Ahuramazda I became king on my father’s throne. When I became king, I did much that was excellent. What had been built by my father, I protected, and other I added other buildings. What I built, and what my father built, all that by the grace of Ahuramazda we built.”3

Xerxes the Great is, ironically, best known for his failed invasion of Greece.  While he may have won the Battle of Thermopylae, he eventually lost the war, and in 479 BC, he returned to Persia.

Xerxes and the Book of Esther

Many scholars have pointed out that chronology of the book of Esther fits nicely with Xerxes Greek campaign.  The great feast that he threw in his third year may have been part of his planning with the nobles of the Kingdom for his invasion of Greece.  William Shea notes, “With good reason, then, it has been suggested that the 180-day “banquet” in Xerxes’ third year referred to in Esther 1:1-3 was connected with laying plans for that Greek campaign. The presence of the “army” (MT) or the “officers of the army” (LXX) in Susa at that time (v. 3) lends some support to the suggestion. Herodotus, incidentally, devotes a dozen lengthy paragraphs to Xerxes’ discussion with his nobles and generals describing the decision to carry out the campaign against Greece (7. 8-19).”4

The four years between the deposition of Vashti as queen and the selection of Esther as the new queen coincides with the four years Xerxes was on his campaign to Greece.  Herodotus records that Xerxes went to Susa upon his return from his failed invasion of Greece.

The Palace at Susa

The Palace at Susa served as the winter residence of the Persian kings of the Achaemenid empire.  Built by Darius I, it is the setting for the book of Esther.  The remains of the palace, located in modern-day Iran, are visible from Google Earth.  Excavations at Susa have revealed that the descriptions of specific places within the palace in the book of Esther – the Audience Hall/Court of Gardens (Es 1:5), the Outer Courtyard (Es 6:4), the Inner Courtyard (Es 5:1a) and the Throne Room (Es 5:1b) – were accurately described by someone who had an intimate knowledge of the palace.5  French archaeologist, Jean Perrot served as the dig director at Susa for over a decade. Before his death in 2012 he said, “One today rereads with a renewed interest the book of Esther, whose detailed description of the interior disposition of the palace of Xerxes is now in excellent accord with archaeological reality.”6

The Reliefs at Persepolis

Persepolis was another of the Persian capital cities.  It is located in the southwestern region of modern-day Iran and is one of the best-preserved royal cities from the ancient world.  Darius I constructed the fortifications, other central buildings, and began the Apadana and treasury.  Xerxes completed the Apadana and treasury, and built the gate of all nations, his palace, and the harem.7   Persepolis contained the immense wealth of the Persian empire.  When Alexander the Great conquered the city and destroyed it he took away all that was of value to him.  Plutarch records, “They say that as much coined money was found there as at Susa, and that it took ten thousand pairs of mules and five thousand camels to carry away the other furniture and wealth there.”8

Arguably the most famous surviving relief from the treasury at Persepolis depicts a king on a throne with a staff in one hand and a flower in the other.  Behind him stands the crown prince.  Traditionally scholars have identified the king as Darius I and the crown prince as Xerxes.9

The Inscriptions of Xerxes

Xerxes, like many of the ancient kings, described himself in glowing terms.  Most of them are word-for-word adoptions of inscriptions his father, Darius I.  For example, in one inscription from Persepolis (XPl), Xerxes states, “I am not hot-tempered. Whatever befalls me in battle, I hold firmly. I am ruling firmly my own will. The man who is cooperative, according to his cooperation thus I reward him. Who does harm, him according to the harm I punish.”10  This is a virtual copy of an inscription from Darius’ tomb.11

The most important inscription from his reign is the Daiva Inscription, in which Xerxes describes the extent of his empire:

King Xerxes says: By the grace of Ahuramazda these are the countries of which I was king apart from Persia. I had lordship over them. They bore me tribute. What was said to them by me, that they did. My law, that held them: Media, Elam, Arachosia, Armenia, Drangiana, Parthia, Aria, Bactria, Sogdia, Chorasmia, Babylonia, Assyria, Sattagydia, Lydia, Egypt, Yaunâ, those who dwell on this side of the sea and those who dwell across the sea, men of Maka, Arabia, Gandara, India, Cappadocia, theDahae, the haoma-drinking Sacae, the Sacae wearing pointed caps, Thrace, men of Âkaufaciyâ, Libyans, Carians, and the Nubians.12

A humorous inscription commissioned by Xerxes survives near Lake Van.  The text is recorded in the Persian, Babylonian and Elamite Languages, and is the only Achaemenid royal inscription outside of Iran.  It reads:

“I am Xerxes, the great king, the king of kings, king of all kinds of peoples with all kinds of origins, king of this earth great and wide, the son of king Darius, the Achaemenid.

King Xerxes says: King Darius, my father, by the grace of Ahuramazda built much that was good, and he gave orders to dig this niche out, but because he did not make an inscription, I ordered this inscription to be made.”13

Basically, Xerxes declares his father made a place for an inscription but never finished it, so he wrote something to fill the space.

The Tomb of Xerxes

After his campaign to the west, Xerxes spend the remaining years of his reign completing the work his father began at the Persian capital of Persepolis.  He was eventually assassinated by the captain of his bodyguard having reigned as the king of Persia for 20 years.  Xerxes tomb is believed to be the right-most of the four tombs at Naqsh-I Rustam.  Its façade is built carved from the stone as a recessed cross.

Archaeological findings and other historical records provide the cultural background that illuminates the biblical world in the Persian era.  It is popular today to hear critics claim that the book of Esther is a fanciful court tale, likely written hundreds of years after the purported events, and devoid of historical accuracy.  Archaeology, however, has affirmed numerous details about the life of Xerxes and the stetting of the book of Esther.  Simply put, the Xerxes of Scripture accords well with the Xerxes of history, and the chronology of Scripture fits with what is known about his life.

9 M. Nazanin, National Archaeological Museum of Tehran. Personal Email to the author. May 19, 2020.