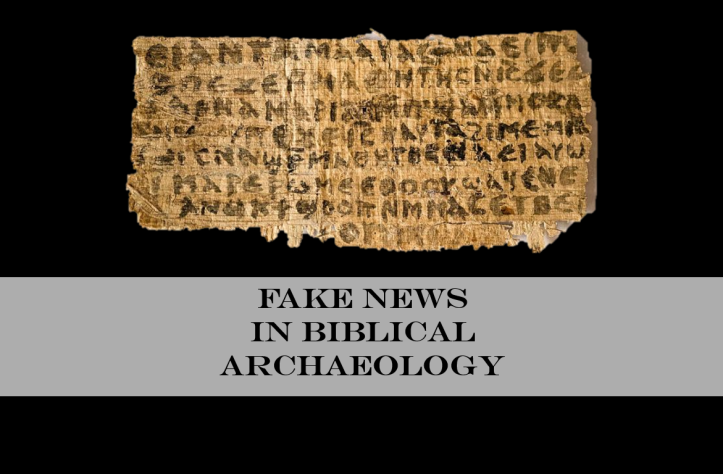 In a world of fake news and internet hoaxes it’s important to carefully check your sources before you inadvertently spread misinformation.  The world of archaeology is no exception to sensationalistic stories and purported “discoveries” that turn out to be flat-out false.  This is especially true in the world of biblical archaeology, which has seen its fair share of fake finds.  Unfortunately, this sometimes takes in undiscerning Christians and occasionally even “experts” who are overly invested in the news.  So, to help clarify things and to put an end to the urban myths I continually hear touted by well-meaning people, here are five archaeological discoveries that are simply not true.

This is probably the “discovery” I hear people repeat most often.  Maybe you’ve heard it to: “Archaeologists have discovered Egyptian chariot wheels and bones in the Red Sea, which proves the story of the Exodus and the crossing of the Red Sea in the Bible.”   This claim seems to have originated in 1993 through a newsletter put out by the “Wyatt Archaeological Research.”1 I didn’t know Ron Wyatt and I have no animosity towards him. However, the following information makes me question his claims:

b)  Ron Wyatt was never carried out a systematic excavation that was licensed by the Israeli government. Joe Zias, the former Curator of Archaeology and Anthropology for the Israel Antiquities Authority said, “Mr. Ron Wyatt is neither an archaeologist nor has he ever carried out a legally licensed excavation in Israel or Jerusalem…We are aware of his claims which border on the absurd as they have no scientific basis whatsoever nor have they ever been published in a professional journal. They fall into the category of trash which one finds in tabloids such as the National Enquirer, Sun etc. It’s amazing that anyone would believe them.”2

c) Ron Wyatt never published any of his supposed finds in a peer-reviewed archaeological journal.  Publishing something in your own newsletter or on your own website does not pass the checks-and-balances peer-review.  Dr. Scott Stripling, the Director of Excavations at Shiloh, led by the Associates for Biblical Research, says that the goal of archaeology is not excavation, but publication.

d) Ron Wyatt never made any of his supposed discoveries available for trained archaeologists to examine.

e) Ron Wyatt never adequately addressed inconsistencies in some of his stories, such as how he discovered the supposed chariot wheels at a depth of 200 feet using scuba equipment designed for depths of 125-130 feet.

f) Marine biologist, Dr. Robert Carter has pointed out numerous problems identifying the coral-encrusted structures Ron Wyatt found as chariot wheels, including the fact that “many species of coral will grow a large, flat plate on a stalk-like projection, giving the appearance of an axle and wheel to those not accustomed to coral growth forms.”3

f) People, like respected geologist John Baumgartner, who knew Ron Wyatt and worked closely with him, have testified that he was dishonest with his discoveries, misrepresented the views of others, and intentionally deceived people.4

Despite these serious deficiencies, those who uncritically follow Ron Wyatt continue to promote his almost 100 biblically-related “discoveries,” (all of which were made within a decade!  Clearly these people don’t know how archaeological excavations are conducted in the real world.).  These alleged discoveries include:

The list of fantastical discoveries should, in and of itself, raise questions about any discovery Ron Wyatt claimed to have made.  This didn’t stop his “discovery” of chariot wheels spreading.  It has been repeated in articles and books and documentaries though.  In actual fact, Ron Wyatt’s work has universally debunked by respected archaeologists and scholars.   In fact, even two ministers in his own denomination (Seven Day Adventist) wrote an entire book called, “Holy Relics or Revelation: Examining the claims of Ron Wyatt” and concluded that his work was largely a hoax.5

The Egyptian chariot wheel story gained new a new life when it appeared in an online article in World News Daily, which claimed, “Egypt’s Antiquities Ministry announced this morning that a team of underwater archaeologists had discovered that remains of a large Egyptian army from the 14th century BC, at the bottom of the Gulf of Suez, 1.5 kilometers offshore from the modern city of Ras Gharib.”6  Those who were taken in by this hoax obviously didn’t read the disclaimer at the bottom of the article which read, “World News Daily Report assumes all responsibility for the satirical nature of its articles and for the fictional nature of their content.”

To be clear, no chariot wheels from the Egyptian army that drowned chasing Moses and the children of Israel as described in Exodus 14 have ever been found.

In contrast to hoaxes like this, there is good research being done by respected scholars and archaeologists that has confirmed numerous details of the biblical account of Israel in Egypt7, identified the likely Pharaoh of the Exodus8, and highlighted evidence for the actual date of the Exodus.9 10 11

Ron Wyatt supporters will often claim that his discoveries were suppressed because of professional jealousy. I know numerous biblical archaeologists personally, and I have interviewed numerous others. They are humble and frequently collaborate and support each other’s work, even if they don’t always agree with each other’s conclusions.  “Professional jealousy” is an inaccurate description of the real world of biblical archaeology.  The reality is that the Associates for Biblical Research (www.BibleArchaeology.org), a group of Christian archaeologists and scholars who are dedicated to demonstrating the historical reliability of Scripture, often promote the findings of other archaeologists who have made legitimate discoveries in a controlled archaeological excavation.  The reason they do not promote Ron Wyatt’s work has nothing to do with professional jealousy; it has everything to do his unsubstantiated, unscholarly, and, quite possibly, fraudulent claims.

In 2012, Harvard University professor, Karen King, announced the discovery of a papyrus that was written in Coptic (an ancient Egyptian language) that read, “Jesus said to them, ‘My wife…” and may have referred to Mary Magdalene.  King provocatively named it the “Gospel of Jesus’s Wife” and dated it to the fourth century AD, maintaining that it might have been copied from a second-century AD “gospel.”12

Almost immediately, scholars began to suspect it was a modern-day forgery, as one pointed out that the text and line breaks appeared to be copied from another papyrus that had been published in a 1924 book.  Eventually Ariel Sabar, an investigative journalist from The Atlantic did an expose that tracked town the true original owner of the papyrus, a former Egyptology student named Walter Fritz who had at one time run an art website that sold pieces that looked like ancient manuscripts.  Fritz eventually admitted to being the owner of the papyrus.  While he never admitted to forging it, he did stress that he had never once claimed the papyrus was authentic.13

Karen King eventually conceded that the papyrus is likely a forgery and that its owner had lied to her about its provenance.  Sadly, as is all too common in cases like this, the original announcement was met with great interest and picked up by news networks around the world, while the retraction generated little interest and coverage.

People interested in following the discovery of new manuscripts related to the Bible would be better off following an expert organization, such as the Center for the Study of New Testament Manuscripts at www.csntm.org or the Current Events updates at www.BibleArchaeology.org.

Goliath’s Skeleton – In the Bible, Goliath is the great Philistine warrior who is described as being over nine feet tall (1 Sa 17:4).  In February 2018, a news story made its way around social media proclaiming that Goliath’s skeleton had been discovered.  The sensationalistic claim went on to declare:

“Diggers in Israel believe they’ve made a giant discovery. For they’re convinced they’ve come across Goliath’s skull! And what’s more, they say, the stone from David’s slingshot is still embedded in the forehead.”

Archaeologist Dr. Richard Martin says: “We found the skull in the Valley of Elah, in the foothills of the Judean Mountains, where David’s battle with Goliath took place. The skull is huge and clearly belongs to a man of enormous stature.”14

The story is essentially recycled from a 1993 article that appeared in the tabloid Weekly World News.  Some of the accompanying pictures were actually taken from a 2008 photoshop contest from the website Worth 1000, called “Archaeological Anomalies 12,” in which participants submitted pictures that were intended to “create and archaeological hoax.”  One of the pictures was an actual photograph, but it was of a sculpture done by Italian artist Gino De Domonicis called “Calamita Cosmica” (“Cosmic Magnet”), which is in the Museo Nazionale delle Arti del XXI Secolo in Rome.15

Rather than being taken in by obvious tabloid trash, there is real research being done by actual archaeologists on the Philistine people.  The recent discovery at the Philistine city of Gath of a proto-semitic inscription dating to the 10th century BC with a name that etymologically very close to Goliath, demonstrates that names like this were common at the time the Bible says they are.16  In 2016, a cemetery was excavated at the city of Ashkelon, which demonstrated that Philistine burial practices were different than their Canaanite and Israelite neighbors.17  To date, no giant skeletons have been found there.

Fake news is nothing new, and hoaxes are not unknown in the world of biblical archaeology.  There are many reputable archaeologists doing good field work in the lands of the Bible.  The work of the Associates for Biblical Research (www.BibleArchaeology.org)  is one such group whose announcements and discoveries can be trusted.  So check the source your information before your share it.

FULL DISCLOSURE:  I am a staff member and writer for the Associates for Biblical Research.

Who was the enigmatic "So, King of Egypt" (2 Kings 17:4)?
The TOP THREE REPORTS IN BIBLICAL ARCHAEOLOGY from April 2022 were about a New Testament-site, an Old Testament-era female Pharaoh, and one of the most famous relics of all-time.
There has been some one-sided, critical (and inaccurate) articles about the recently announced lead curse tablet from Mt. Ebal. I've tried to provide a balanced view in Ten Thoughts About the Lead Tablet.
Here is a summary of some of the archaeological evidence supporting the gospel accounts of the first Easter and the resurrection of Jesus Christ.